From 3-month delay and potential loss of regulatory certification, to early delivery

Cargo Logic Air (CLA) is a global airfreight operator. Planning their move from Stansted Airport to London Heathrow, while maintaining seamless operations and retaining CAA certification, was fraught with risk and a careful plan to accurately predict the likelihood of meeting the timescale was required.

De-RISK was engaged by CLA’s strategic partner, PA Consulting to undertake a Strategic Delivery Assurance (SDA) review with a focus on the timescale risk. This methodology is proven to increase predictability by identifying the real risks and opportunities inherent in the project. Assumptions are revealed and previously unseen risks are identified.

Initial analysis showed a 0% chance of hitting the required milestone. In fact, the SDA revealed a 3-month delay to the transition which could result in the subsequent loss of CAA licence. A catastrophic outcome.

The central reason for the delay, as identified by the SDA methodology, was that the transition strategy was based on risky assumptions that key staff would not transition from Stanstead to Heathrow but instead could be replaced by alternative recruits who could be quickly trained to the required level to pass the CAA audit.

In fact, it quickly became clear that recruitment and training would far exceed the time allocated in the original plan and a significant staff shortage would severely jeopardise operational stability.

With the risks identified, PA Consulting was able to help senior managers develop an alternative plan, based on retaining key staff and developing a more phased recruitment programme.

An SDA of the new plan showed that CLA now had a 100% chance of hitting the required milestone. Better still, the new plan actually readied the CLA team to transition to their new working environment with three months to spare.

“With so much at risk, little could be left to chance. Our SDA methodology revealed flawed logic that impacted a series of risky assumptions. Once managed, the team were actually able to put the transition programme ahead of plan.” 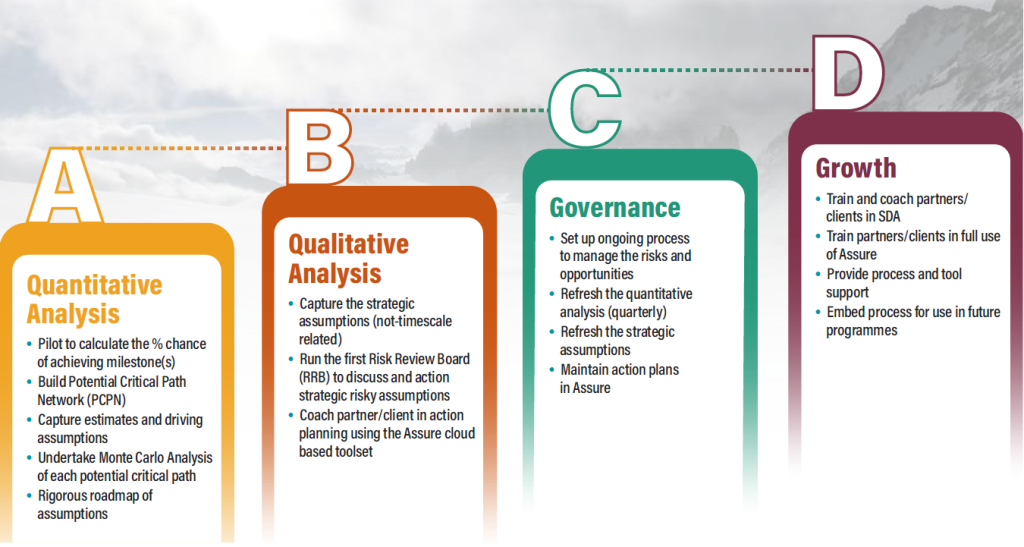