A major UK station refurbishment was being undertaken with the need to keep the station operational throughout the programme. The Programme Director was nervous that an already ambitious programme was being complicated by the need to maintain operations and requested that Advance Consulting use SDA to assess the timescale risk.

The SDA predicted that the “station opening” milestone would be missed by 5 months. At the same time, a Quantitative Schedule Risk Analysis (QSRA), undertaken by the Network Rail risk team, was predicting
an 87% chance of hitting the milestone.

Several months later, the Network Rail team were reviewing what had happened. The station officially opened “on-time” but with many areas still unfinished. When the Queen came to open the station, there were embarrassing cordoned off sections where work was incomplete and the project still on-going.

Some-time later, when the team reached the position that they planned to be in for the station opening, they realised that it had taken 5 months longer than the original plan. Exactly what the SDA had predicted.

Soon after, the Programme Director moved on to a new (much larger) rail infrastructure programme and he immediately called Advance Consulting to have a SDA performed on the new programme. This
showed that he had inherited a programme that was facing disastrous delays and allowed him to manage expectations in what was to be a career-defining role. This enhanced Advance’s reputation and they remained engaged with the programme for some considerable time.

“It’s not unusual that the SDA reveals unpalatable results. There are many times when both the QSRA and SDA processes can work together but the process rigor behind SDA has proven time again to be more accurate. This was a classic situation where the client’s wishful thinking led him to put his faith in QSRA and when the outcome turned out be almost exactly what was predicted, he was convinced of the value of SDA and called us back in as soon as possible.”

THE UPSIDE OF ACCURATELY PREDICTING THE DOWNSIDE

The Network Rail team were shocked but ultimately very positive about the results when they realised the true nature of their undertaking and the ability to manage expectations before it was too late. And they continued to use Advance to support the programme using SDA to help meet subsequent milestones.

The SDA methodology takes a more strategic extraction of the programme schedule, with a combination of qualitative and quantitative assessments of current assumptions rigorously captured. This rigor is different from QSRA, which is based on the “current” plan, which implicitly assumes that this plan is “correct”. In reality, the original plan has often been “squeezed” to make it fit the required timescales, e.g. the end milestone is fixed and the tasks that make it up are squeezed until they add up to the required answer. 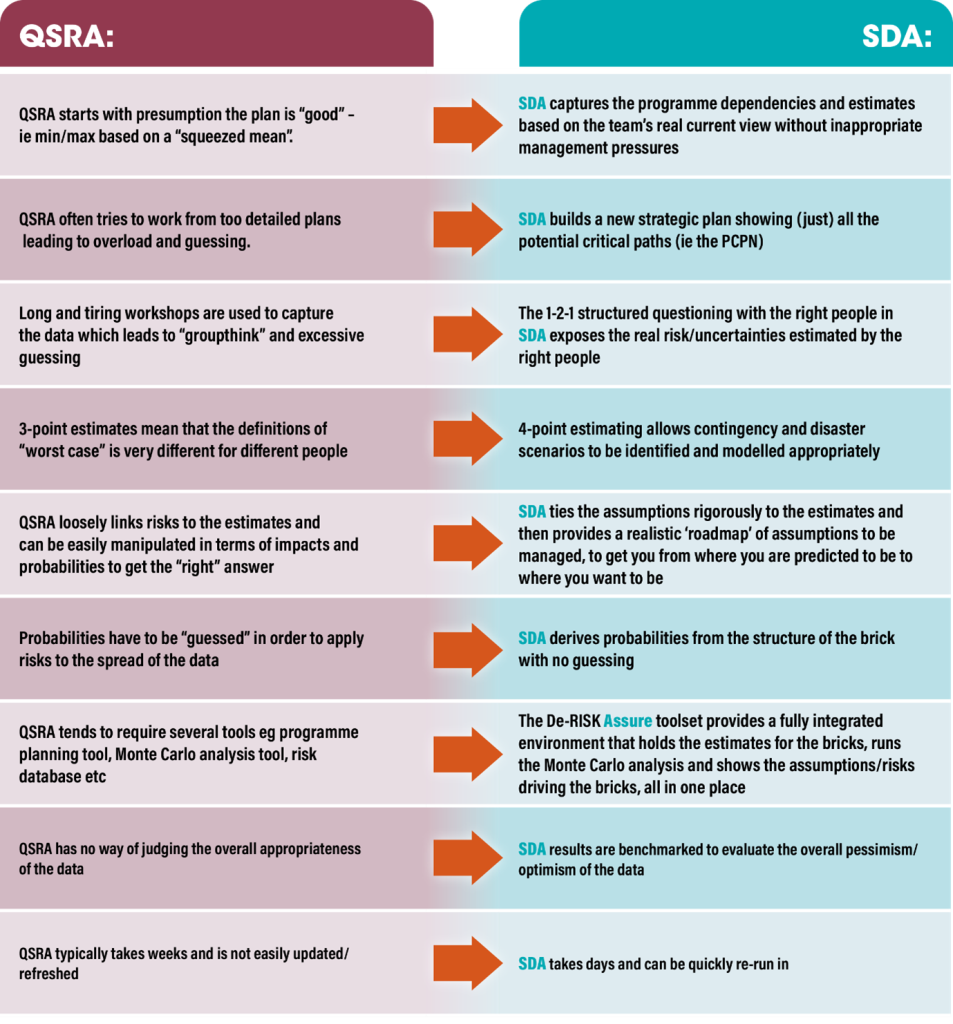